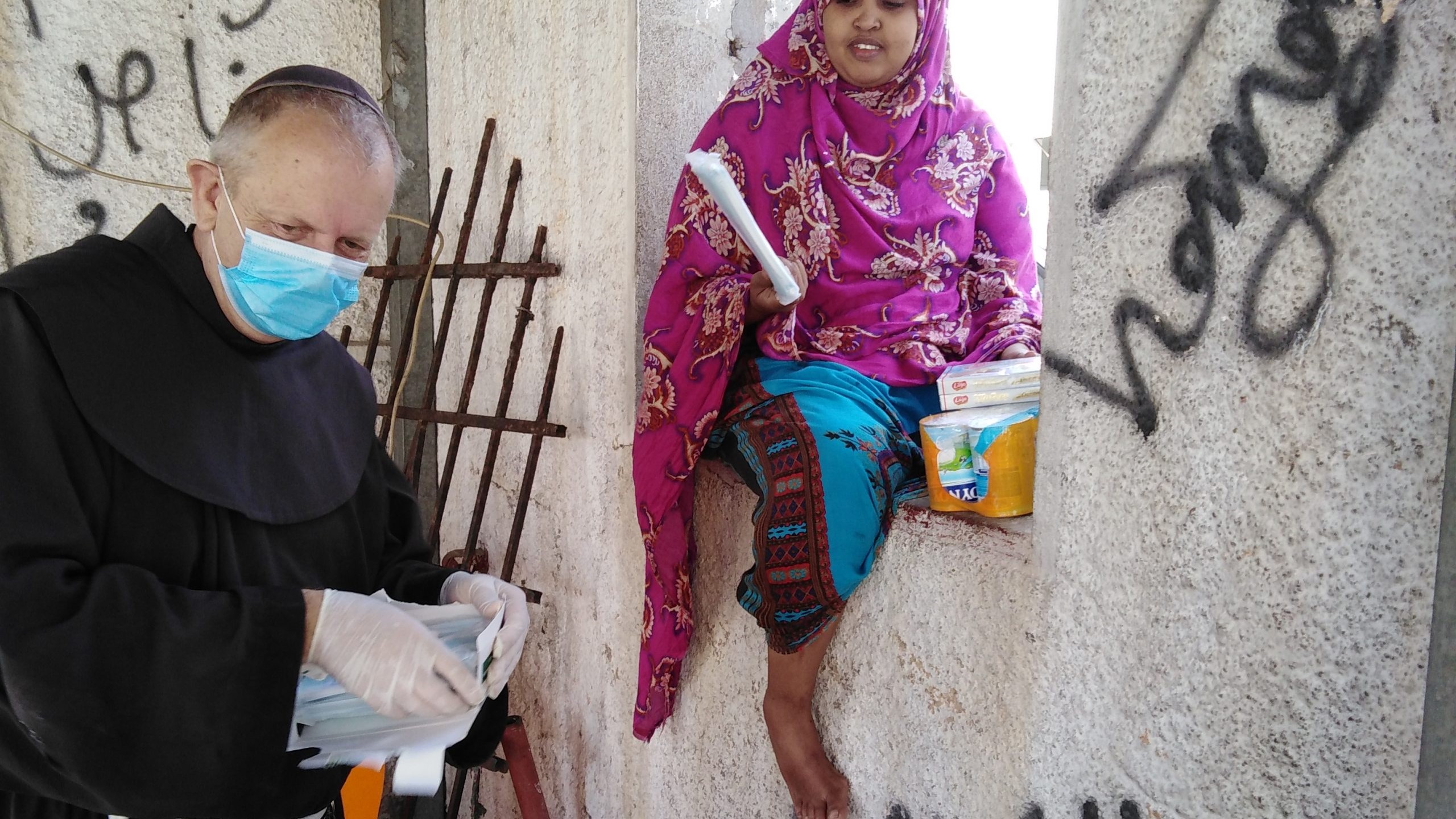 “May the Lord restore our sight, so as to rediscover what it means
to be members of the human family” Pope Francis

Responding to IDP emergencies despite the pandemic

Internal displacement has never stopped during the COVID-19 crisis. Triggers such as civil wars, clashes between communities and natural disasters have continued to cause forced displacement within states, and closing borders has probably added to the rise in numbers. But Catholic actors have not turned away in spite of the health emergency; on the contrary, they have continued to assist internally displaced persons (IDPs) while the pandemic has been raging.

Colombia is in second place in the world, after Syria, for the number of internally displaced persons. Conflict and violence in Colombia have resulted in 5.5 million IDPs in the last 50 years. Eight million people are at risk of being displaced as a result of the current violence. For the most part these are farming families forced to abandon their homes and cultivated fields and move to the city, where they live in a state of extreme poverty. The local Church is committed to promoting dialogue and providing relief to victims of violence (IT). First, the Church is dedicated to the protection of IDPs’ and migrants’ human rights. The response offered to these displaced persons is concrete and integral: food, money, drinking water, and also evangelization, education and information. Secondly, the Church promotes local communities and helps to protect their leaders through specific actions such as the eradication of coca plants and securing water resources. Finally, it aims to promote local development and create opportunities for social reintegration for former combatants who have agreed to lay down arms. An example is setting up a farm with aquaculture in Caquetá that permits 90 former FARC guerrillas to turn the page and make a new life, leaving violence behind.

A clash that began at the end of October between two factions of a tribe in South Sudan has claimed the lives of many civilians, left houses burnt to the ground, and forced hundreds into displacement. The strife arose due to a shortage of water and pastures. The men are still in the bush areas fighting over cattle, water and pastures, while over 700 displaced women, children and elderly people have been given refuge in a Catholic mission school in South Sudan’s Archdiocese of Juba. (Schools remain closed throughout the country.) The displaced are also given humanitarian support including food and clothing by the Legion of Mary, a lay apostolic association of Catholics who perform acts of charity.

In Burkina Faso, escalating violence by armed groups and jihadists in the Sahel region has displaced nearly a million people inside the country. This comes on top of the extreme vulnerability caused by the COVID-19 crisis. In response, the International Catholic Migration Commission (ICMC) and the Episcopal Commission for the Pastoral Care of Migrants and Refugees (CEPMR) of Burkina Faso have initiated a joint programme to help protect displaced children. The joint ICMC/CEPMR project aims to provide displaced children with education, health care, psychosocial care and documentation assistance. The educational activities provide informal schooling until the children can join the formal school system. At that point, 30 children will receive scholarships to attend local schools. Other features of the project are recreational activities, hygiene and sanitation training, vaccination campaigns and medical check-ups. The initiative is made possible thanks to the Raskob Foundation, which supports Catholic Church-based programs in the U.S.A. and around the world.

Dialogue between religions serves to join believers of different faiths, who embrace common principles of solidarity and love for fellow human beings, and avoid or overcome conflicts. In this time of pandemic, finding points of encounter and dialogue is more necessary than ever between faiths to adopt shared visions of the future for the realisation of the common good and to prevent conflicts.

Leaders and representatives of major religions and global policy institutions participated in the annual G-20 Interfaith Forum on Oct. 13-17. Catholic participants emphasised the need arising from COVID-19 for people to prepare for the future, and religious leaders have the chance to make sure that the world’s most vulnerable, such as people on the move, are included. Father Augusto Zampini Davies, adjunct secretary of the Vatican Dicastery for Promoting Integral Human Development, told the forum that COVID-19 is worsening existing inequalities and injustices. For this reason, interreligious dialogue and cross-cultural cooperation are crucial in times of crisis. Vatican officials, along with their counterparts in other churches and faiths, are listening “to what’s happening on the ground” and providing assistance; they are also working with governments on matters concerning health care, jobs, food security and ecological crisis. Just as COVID-19 is new, religion should bring something new to “help in the cure” through working together for a healthier global family and planet, Zampini said.

The pandemic “has exacerbated racial prejudice and led to an increase in violence” against people on the margins of society, and “people on the margins, especially migrants, refugees and prisoners, have been the most affected”. From this acknowledgment arises the joint appeal of the World Council of Churches and the Pontifical Council for Interreligious Dialogue (PCID), “Serving a Wounded World in Interreligious Solidarity: A Christian Call to Reflection and Action During COVID-19 and Beyond.”  (IT; FR; ES; PT). It calls on Christians to reflect on the importance of interreligious solidarity as the world confronts the COVID-19 crisis, but it is also addressed to followers of other religions, “who have already responded to COVID-19”. The document notes that all human beings are one family, created by God. This serves as a foundation for universal solidarity, following the example of Christ in serving others. In his introduction to the document, Cardinal Miguel Ángel Ayuso Guixot, President of the PCID, notes that the pandemic “has exposed the woundedness and fragility of our world, revealing that our responses must be offered in an inclusive solidarity, open to followers of other religious traditions and people of good will, given the concern for the entire human family.”

Cardinal Charles Maung Bo of Yangon, president of the Federation of Asian Bishops’ Conferences, said: “I consider dialogue to be absolutely essential to peacebuilding and conflict-resolution.” Speaking at the online meeting of the South-East Asia Freedom of Religion or Belief Network, he affirmed that religion must not be a cause of conflict. The Cardinal decried the Myanmar army’s campaign against the Muslim Rohingya minority in Rakhine state. “The crimes committed against Muslims in Myanmar – not only in Rakhine but throughout the country – is an assault on human dignity itself and all of us, of whatever faith, must cry out for justice,” he explained. “[…] Inter-faith dialogue and freedom of religion or belief go hand in hand, but neither must be compromised by the other.” For interfaith dialogue to make a difference, “it must be replicated at the grassroots levels, within villages, within neighbourhoods, among people who live side by side day by day, not simply between religious leaders who meet from time to time.”

Voices from the Church

Father John Luke Gregory, Vicar General of the Archdiocese of Rhodes and Franciscan Friar of the Custody of the Holy Land, has been ministering on the Greek island of Rhodes since 2004. Rhodes has a reception centre for refugees and asylum seekers from Africa and the Middle East. Since refugees first arrived, the Vicariate of Rhodes has taken care of these people (IT) and acted as a bridge between them and the local community. “In addition to material needs, a smile can do a lot. And, as Pope Francis tells us, ‘dialogue leads to friendship,'” Fr. Luke reminds us. The Custody of the Holy Land, through the NGO Pro Terra Sancta, has supported this centre since 2015, financing the purchase of food, clothing and personal hygiene items. When the pandemic started, the difficulties increased. Some positive cases of COVID-19 in the reception centre led to lockdown, leaving the refugees even more alone and isolated. However Fr. Luke and two Franciscan brothers continued to help, providing food and basic necessities as well as toys and colouring books for children. “These refugees are the face of Christ. I could not celebrate the Eucharist and live my faith if I did not recognize Christ in the face of the poor, if I did not welcome and share with them what I have,” explains the Fr. Luke.

Sister Neide Lamperti is a Scalabrinian Missionary in evangelical and missionary service to the most vulnerable migrants and refugees (PT). “To be missionaries with migrants, you must have the great courage needed to risk your life while proclaiming the Gospel and your faith and trust in God. It is he who guides us on our path. We must cultivate humility and be willing to learn from the people. We must let ourselves be trained and evangelized by the poor, and open our hearts to inculturation, to learning new languages, to communicating better with migrants, accepting differences without prejudice or discrimination”. Sister Lamperti’s mission calls her to implement concrete ways to increase recognition of the humanity of migrants and refugees, so that they can feel welcomed as persons and integrated with dignity. But being on mission with migrants, she reminds us, also means fighting the erection of barriers, the spread of fear of the other, and denial of assistance to those who are just seeking reasonable improvement for themselves and for their families. “We must go to the periphery,” says Pope Francis, where the people live, including migrants and refugees in inhumane conditions. “He asks us to be evangelical wanderers, without too much baggage, without special means, but with the same intent of Jesus to walk with people, side by side, helping them to keep their faith and their hope for better days,” concludes Sister Lamperti.