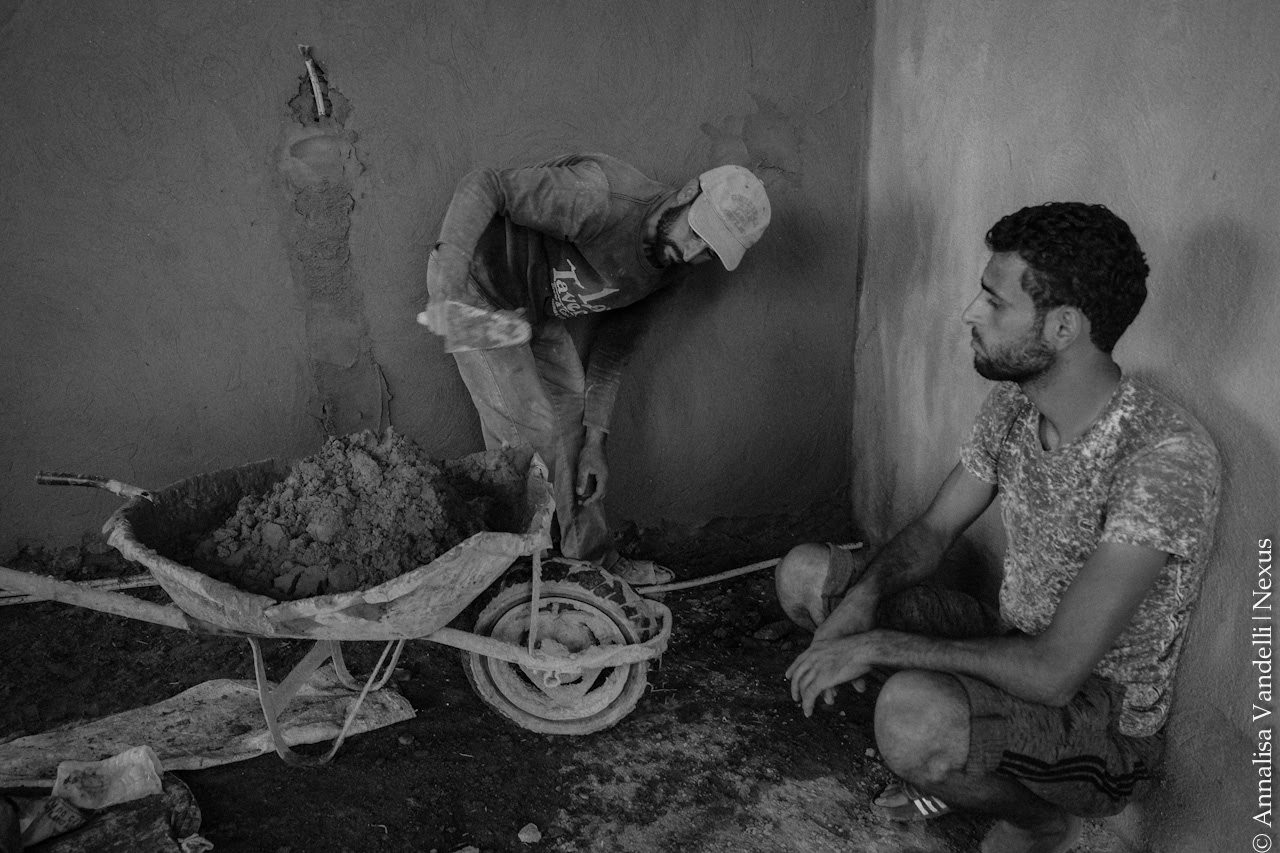 Despite the presence of anti-slavery legislation in several countries, migrant workers are victims of exploitative employers and intermediaries such as recruitment agencies and gangmasters. Their economic weakness, together with the proliferation of undeclared and irregular work, allows criminal organisations and employers to perpetuate illegal treatment of migrant workers.

Today, criminals use deceptive means to hold their workforce captive and exploit their labour. Migrant workers are exploited, using control tactics such as charging extortionate recruitment fees, debts, threats of violence, arrest and deportation, withholding of wages, and the confiscation or destruction of documents. That condition of subjection can result in the deprivation of liberty, forced labour, excessive working hours, unfair wages, and unsafe workplaces and working conditions.

The COVID-19 pandemic placed those already at high risk of exploitation even deeper in harm’s way. On one hand, the crisis has amplified major drivers of modern slavery, such as poverty and financial crisis. On the other hand, migrant workers, already in a vulnerable situation, had their already-constrained movement restricted further, were exposed to isolation and exclusion from adequate healthcare and welfare services, and experienced layoffs and cuts in wages.

This Bulletin calls for all migrant workers to have rights as workers, regardless of their immigration status. Critical gaps remain for the provision of protection for the vulnerable and for the apprehension of perpetrators. This Bulletin presents some best practices and statements that promote the protection of migrants and the adoption of standards and measures that might monitor their working conditions, standards, and rights.

From the beginning of his pontificate, Pope Francis has put human trafficking at the centre of his Magisterium. Mentioning Genesis 4:9 in his Apostolic Exhortation Evangelii Gaudium (2013), he asks: “Where is your brother or sister who is enslaved?” And with harsh words he stresses: “The issue involves everyone! This infamous network of crime is now well established in our cities, and many people have blood on their hands as a result of their comfortable and silent complicity.”

Later, in his videomessage to participants in the International Forum on Modern Slavery, Pope Francis stated that: “We are not permitted to look elsewhere and declare our ignorance or our innocence.” Then, talking to States and International Organisations, he urged them not to stop at the punishment of those responsible, but to address the deepest roots of the problem. “The basic response lies in creating opportunities for integral human development, starting with a quality education,” he explained. Finally, he appealed to the Churches, as all Christians are called to “overcome all kinds of inequality, all kinds of discrimination, which are precisely what makes it possible for a man to make another man a slave.”

During a high-level meeting on the appraisal of the United Nations Global Plan of Action to Combat Trafficking in Persons, the Apostolic Nuncio and Permanent Observer of the Holy See to the United Nations, Archbishop Gabriele Caccia, devoted relevant words to the progress made and progress to build on in that regard. In particular, he stressed that, every year, more traffickers are being brought to justice and “an increasing number of countries have criminalised trafficking in line with the Trafficking in Persons Protocol under the United Nations Convention Against Transnational Organised Crime.” In addition, the strengthened partnerships among States and relevant stakeholders should constitute the basis for crucial cooperation between local authorities, national governments, and faith-based organisations. In this regard, Archbishop Caccia underscored “the impressive work carried out by religious sisters, internationally, nationally, and locally.”

On the occasion of the International Day of Prayer and Awareness against Human Trafficking 2022, Caritas Internationalis invited all its members to engage in the fight against this crime and urged governments to strengthen protective and supportive services for victims and to establish National anti-trafficking plans. As Pope Francis called us to do,  affirmed  the Secretary General Aloysius John, we should be “promoters of an economy of care”, that “cares for work, creating employment opportunities that do not exploit workers through degrading working conditions and gruelling hours.” Caritas Internationalis also called governments to take concrete action to prevent human trafficking and to protect those who suffer this crime.

Addressing the Santa Marta Group International Conference in May 2022, Pope Francis emphasised “the essential need to support, accompany, and reintegrate the victims of human trafficking into our communities and assist them in the process of healing and the recovery of their self-esteem.” Below are some examples of the commitment of Catholic actors in such an effort.

The Mission for Migrant Workers (MFMW) of St. John’s Cathedral offers assistance to more than 380,000 foreign domestic workers in Hong Kong. A lot of them are underpaid, overworked, trapped in the vicious cycle of debt and discrimination, or are victims of physical and sexual abuse. MFMW’s core services include the provision of information and guidance, case support, shelter provision and other rescue and emergency assistance to distressed foreign domestic workers. In addition, they offer “Know Your Rights & Responsibility Training” to help migrant domestic workers understand and exercise their rights in the contract, as well as “Work and Life Skills Training and Workshops”. Finally, MFMW provides training to migrant groups and helps migrant organisations to implement welfare programmes and enhance mutual care and support among migrants and their communities.

Equipped with knowledge and advocacy skills, nuns from across Zambia are advocating against human trafficking. The sisters have hosted radio talk shows and panel discussions, as well as press conferences to end the silence around the structures and situations that perpetuate and sustain this crime. The nuns have also engaged the government, paying visits to government ministries, and asked them to protect both Zambians and all that come over the nation’s borders through trafficking. They have also pledged to organise awareness seminars in their communities and institutions, to provide counselling to rescued victims, and to find ways to reintegrate victims as productive members of society.

The Rerum Novarum Centre in Taiwan belongs to the Society of Jesus and provides asylum for migrant workers abused by their employers, including female workers who have been abused or exhausted in mind and body. The Centre also runs a telephone hotline in different languages and a Sunday training session that provides migrant workers with legal information, legal aid, accompaniment in health matters, psychological support, wage negotiation, and other kinds of professional services so as to raise awareness to issues connected to the workplace. Following the process of digitization, migrant workers in Taipei have been provided with a “city migrant worker’s electronic care card”, thanks to which they can have access to all the information related to common problems and the related numbers for assistance.

The Australian Catholic Anti-Slavery Network (ACAN) supports Catholic entities to identify and manage modern slavery risks in their operations and supply chains. Among other initiatives, it has presented a “Modern Slavery Risk Management Programme”, which aims at designing and implementing a process to identify and mitigate operational modern slavery risks. To achieve this goal, ACAN  brings together Catholic entities to share resources and coordinate action. The final objective is to assist Catholic entities and senior executives in the preparation of annual Modern Slavery Statements, as required by the Commonwealth Modern Slavery Act 2018. Furthermore, ACAN has launched “Building Links”, a modern slavery awareness-raising programme tailored to the construction industry. Principal contractors are encouraged to download, customise, and use an online training for site supervisors and a toolkit talk and posters.

In its eBulletin, the Missionary Society of St Columban reported the story of an Indonesian fisherman named Ascuri. Like thousands of other poor Indonesian migrant workers, Ascuri left behind his wife and children with the hope of securing employment on an offshore long-haul fishing vessel. Working up to twenty hours a day in the open sea, Ascuri was physically and verbally abused. After one year at sea, he found out all his salary was given to his employment agency to pay for the costs of finding him a job and to cover the expenses of food and board on the fishing vessel.  Fortunately, he was referred to the Hsinchu Catholic Diocese Migrants and Immigrants Service Centre for help. The centre’s staff provided Ascuri with counselling and legal aid, as well as helping him find a secure employment, and arranging a lawyer to assist him with his court case against his trafficker.

Fr. Ignatius Ismartono SJ, a 75-year-old Jesuit, is the director of Sahabat Insan (Friendship and Humanity), an Indonesian Jesuit organization based in Jakarta, which deals with migrant workers and victims of human trafficking. In an interview with Agenzia Fides, he speaks about the odyssey of many young people, blocked in a criminal network of national and international intermediaries. “It begins with recruitment thanks to the complicity of some corrupt officials willing to falsify their age. Then they are often sent abroad […] An officer confiscates passports until the debt owed to the mediator is not extinguished.” Sahabat Insan is committed to preventing human trafficking and assisting victims of exploitation. In this effort, the Catholic association can rely on the cooperation of Talitha Kum nuns present in the territory.

In this interview, Sr. Annah (Theresa) Nyadombo, a Carmelite sister and the coordinator of Talitha Kum Zimbabwe, recounts her work against human trafficking. She lives this experience as an opportunity to “prevent all harms, abuse, deception, [and] empty promises.” During her experience, she has assisted survivors of trafficking who had gone to Kuwait, and thanks to the assistance of the Government, were able to come back, but did so in need of assistance and help. Despite the lack of resources, the Zimbabwean Catholic congregation works with victims and survivors of trafficking, especially migrants, advocating for good laws and protecting people. In her final message, she says: “We need to heal the victims through counselling, meditation and pastoral care, accompaniment, and empowerment. Capacity building is also important to help victims to be self-reliant by developing life skills.”