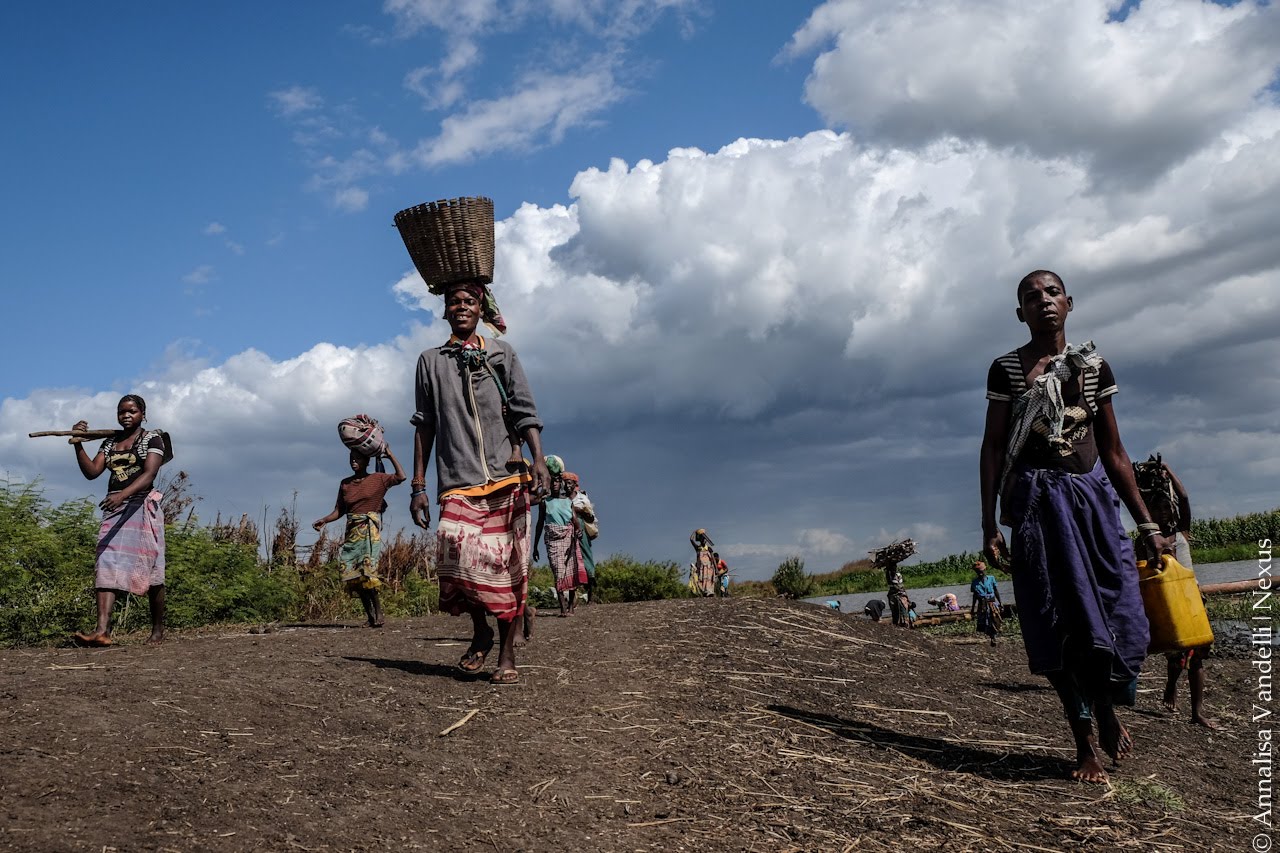 Migration today is not a linear but rather a multidirectional phenomenon, which might include the return to countries of origin for long or short periods. Such a framework heralds a world where migratory movements will be more circular, and in which return and reintegration will be key steps of that migratory process.

Return and reintegration into the society of origin are fundamental elements of migration governance and development strategies, both at national and international levels. Therefore, dignified and safe reintegration requires policies that promote returnees’ economic self-sufficiency, besides their psychosocial well-being and social stability within the community.

There are different types of return: voluntary returns, assisted returns, forced returns, and migrants who might return for different reasons. As an example, the COVID-19 crisis and lockdowns obliged many migrant workers to go back to their home countries, as they had lost their job or the right to stay. There are, therefore, different categories of returnees, and policies and programmes need to fit with their specific needs in order to be effective and to ensure a sustainable and lasting return.

This Bulletin calls for the promotion of assisted voluntary returns that might make further migration decisions a matter of choice rather than a necessity and, to this end, it presents some best practices aimed at assisting returnees to reintegrate into their country of origin, with particular attention to the question of work.

Objective 21 of the Global Compact for Safe, Orderly and Regular Migration (GCM) calls on States to cooperate in facilitating migrants’ safe and dignified return as well as sustainable reintegration into their country of origin. The Holy See also expressed its interest in that regard in the Twenty Action Points for the Global Compacts, drafted in 2018 as a contribution to the GCM mechanism. Action Point n. 20 affirms that: “The host State, donor states or the State of origin should be encouraged to adopt policies and procedures which facilitate the reintegration of returnees.” Therefore, the Holy See proposed the enhancement of infrastructure in areas of return or “assistance for returning workers caught up in foreign crisis” as potential means of help. In addition, it stresses the importance of laws that might recognise acquired educational or professional qualifications so as to enable returnees access to the labour market.

Pope Francis has often focused on war refugees as well as on the persecution of Christian communities – especially in the Middle East (ES; IT; PT) – and on their right to return to their lands. In his traditional address to the members of the diplomatic corps in 2019, the Holy Father encouraged “all those who have sought refuge in other places to do everything possible to return to their homes and in any event to maintain and strengthen their ties to their communities of origin.” Meanwhile, he called for the active participation of the political authorities, designed to “ensure their [returnees’] security and all else needed for them to continue to dwell in the countries of which they are full citizens, and to contribute to their growth.”

The Prontuario de actuación para Acogidas Parroquiales (ES) is a practical guide for the Churches that daily welcome migrants on the ground in Spain. The dossier was prepared by the Mesa por la hospitalidad (Table for Hospitality) of the Archdiocese of Madrid and by the diocesan Caritas of Madrid and presents a specific section (Annex M) on aid for voluntary repatriation in the country of origin. The Annex presents an introduction on voluntary return, before analysing the assistance and services that the Church and the Christian community can offer to returnees. In particular, they focus on “Voluntary Productive Return”, in which the Church can play a proactive role through, among other services, personal counselling and evaluation of the project, monitoring and technical assistance, and economic aid to the productive project where necessary.

Several Catholic actors are directly involved in assisting migrants during their return to the country of origin. The help usually starts before departing, with counselling, administrative, and logistical assistance and continues after arriving, with reintegration assistance. The following are some examples of their work:

The Caritas IAP Foundation, through the Welcome and Inclusion Module (ES), signed a collaboration agreement with the Secretariat of Migrants (Semigrante) to strengthen the attention for the countrymen who annually return to the Mexican state of Michoacán. The ten Listening Centres of the Catholic organisation were added to the work deployed by the government in the facilities of the Semigrante, which operates with the support of 89 municipal migrant centres to receive, attend, guide, channel, follow-up, and accompany returning migrants. Thanks to a medical office and a pharmacy in the facilities of Caritas, free service and medicines are granted to returning Michoacan migrants and those from other countries passing through the state.

Iraqi people who managed to go back home found everything destroyed. AVSI Middle East carries out several reconstruction projects in Iraq, thanks to the funds of the U.S. Department of State: Bureau of Population, Refugees, and Migration. At the core of these initiatives there is the goal of strengthening the socio-economic resilience of the population through various support actions. In Qaraqosh, for example, the families were accompanied on their return to their properties and supported in the redevelopment of their agricultural activity. In supporting Yazidi families, who fled persecution by the Islamic State, AVSI has fostered social inclusion and collaboration of Yazidis with their host communities. The project consisted of local families hosting Yazidi families and giving half of their farm to them.

Religious of the Good Shepherd – Centre for the Overseas Workers (RGS-COW) is committed to assisting returning Overseas Filipino Workers (OFWs) in the poor communities of Davao and surrounding areas, who were unfortunate in their endeavour in other countries, particularly women who worked abroad as domestic helpers. Since the beginning of its operation, RGS-COW has provided services to the returning OFWs such as counselling, vocational and skills training, and micro-finance credit. It has also provided legal assistance through its NGO partner in Japan to abandoned Japanese Filipino children – in order to obtain financial support and legal recognition from their Japanese fathers. The Centre is also working against Human Trafficking, from advocacy to therapeutic interventions and temporary shelter for the victims.

Caritas Myanmar has been facilitating return and working towards resettlement in Kachin State since 2016. Their focus is on justice, self-reliance, and the entitlement of culture and rights. The objective is to enable people who return to flourish socially, economically, and spiritually. To this purpose, they promote peacebuilding and adopt a people-led planning approach. The resettlement programme was launched with the support of Secours Catholique-Caritas France, and Misereor and lasts for three years. In the first phase Caritas helps returnees understand land rights and support them in getting back to their property, in addition to helping them build houses. Then, the project will link farming communities and their products to market opportunities through capacity building, community mobilisation meetings, and educational demonstrations, in order to improve community-initiated sustainable livelihood opportunities.

In an article in the italian newspaper Avvenire (IT) is the story of Seny Diallo, a Senegalese migrant who, thanks to the Salesian circular migration project, became a cultural mediator and went back to his country to promote local development. Seny’s story begins with the difficult decision to leave her village, and continues with the very hard journey first in the desert and then in Libya, going through months of difficulties and pains. Surviving the sea crossing, Seny was welcomed at the lay Salesians Aidone Centre in Sicily. Here, he went to school, held training courses, and then, thanks to the Salesian circular migration project, he went back to Senegal where he cooperates with the Catholic charity to help other young students in their villages.

During 2020, many migrant workers from Tajikistan lost their jobs abroad, due to the closure of borders as a result of the pandemic. In response, the Tajik Church helped returnees create new job opportunities and reintegrate into the community. Among them was Farhod Islomov, who returned home after a long period in Europe. The Tajik charity supported Farhod to reopen his retail shop for clothes and accessories. In collaboration with Caritas Internationalis and Caritas Belgium, the Tajik charity supported Farhod by helping him draw up a business plan and cover the initial costs.

In Liberia, high levels of unemployment and limited economic opportunities led many young people to leave in order to meet their most basic needs. In the attempt to reach Italy in search of a secure job, Mohammed’s journey was interrupted in Mali, where he was robbed by traffickers and then caught without the correct paperwork and arrested by the police in Algeria to be finally deported. After more than two years of uncertainty and danger, Mohammed had the opportunity through the IOM to return home. In the two months that he waited for his departure, he was connected to the Catholic Relief Services Action for the Protection and Integration of Migrants in Africa programme, also known as the APIMA, which is active in five countries across West Africa. With services offered through the APIMA programme, migrants returning home like Mohammed are increasing their wellbeing and developing their personal direction and hope for the future.

Although he has lived in Italy for 15 years, Serigne Mortalla Diop has never been able to fully integrate into his host society, but above all he has never been able to obtain administrative documents in order to carry out a regular job, always forced to work in the informal sector, mostly as a farmhand. The Volontariato Internazionale per lo Sviluppo (VIS) gave him the chance to go back to Senegal, his country of origin. So, after two decades, he could be reunited with his family. As he recounts, the VIS project “UNO” (IT) completely financed the costs of his return to Senegal and supported him in starting a business. Together with the VIS local agent, he developed a livestock breeding project for the production of milk and meat. Not only is he now able to support his family expenses, but its activity contributes to job creation and food security of other local families.