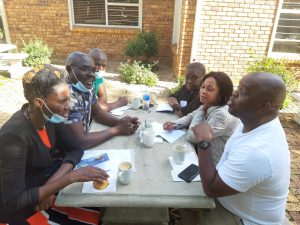 The workshop took place from the evening of the 22nd to the morning of the 25th November 2021 in Benoni, Johannesburg. Coordinated by Sr. Maria de Lurdes Lodi Rissini, National Director of Caritas South Africa and Coordinator of the Southern Africa Catholic Bishops Conference (SACBC) Migrants and Refugees Office, it brought together Diocesan Coordinators from across South Africa.

Aimed at promoting a coordinated and sustainable response to migrants and refugees, the workshop focused on informing and empowering the Diocesan Coordinators and, through them, both the Dioceses and Parishes. The primary objective was to build capacity and facilitate the establishment of Refugee and Migrant offices in each of the SACBC’s 29 ecclesiastical territories. Sr. Maria actively involved the participants in the planning and development of proactive measures to address the plight of migrants and refugees. 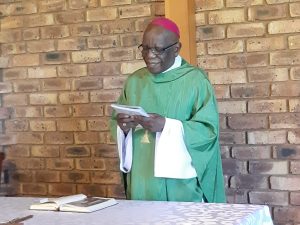 Archbishop Buti Tlhagale, SACBC Liaison Bishop for Migrants and Refugees, attended the workshop. During his homily in a Mass on the 23rd of November, His Grace spoke of the plight of migrants and refugees, suggesting that the pastoral work with them be considered a new missionary territory. He went on to speak at a practical level, saying that “our biggest mission will be to have in every parish people dedicated to this new mission of migrants and refugees.” The Archbishop urged the faithful to welcome migrants and refugees into their communities. He mentioned that “we need to pray to God that he be generous in increasing our love. A love that is not selective. A love that accepts another human being.”

There were several notable speakers during the workshop. Ms. Sally Gandar, Head of Advocacy and Legal Advisor at the Scalabrini Centre of Cape Town, walked the diocesan coordinators through the historical background of migrants and refugees in South Africa, before outlining the significant legal framework that exists. Through open discussion, Sally assisted the participants in understanding the social, economic, and political realities that migrants and refugees experience. 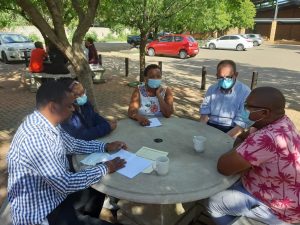 Mr. Mario Almeida, of the Migrants and Refugees Section, gave an online presentation that outlined the history of the Section and examined its core mission. He described the work of the Section as assisting the Bishops’ Conferences in their pastoral responses to the needs of migrants, refugees, internally displaced people, victims of human trafficking and climate displaced people. This occurs through the gathering and sharing of information, production of resources, communication and networking as well as help in setting up M&R Commissions. The main documents published were briefly introduced, namely the Pastoral Orientations for the different categories of people on the move.

Day two of the workshop saw participants engaged in working groups, aimed at structuring sustainable Pastoral Care within each Diocese. Emphasis was placed upon access to basic human rights, and the drive to assist those who suffer from statelessness, a condition that continues to affect millions of people around the world. The promotion of the migrants and refugees’ fundamental Human Dignity drives both Sr. Maria and the Diocesan Coordinators forward on their work.