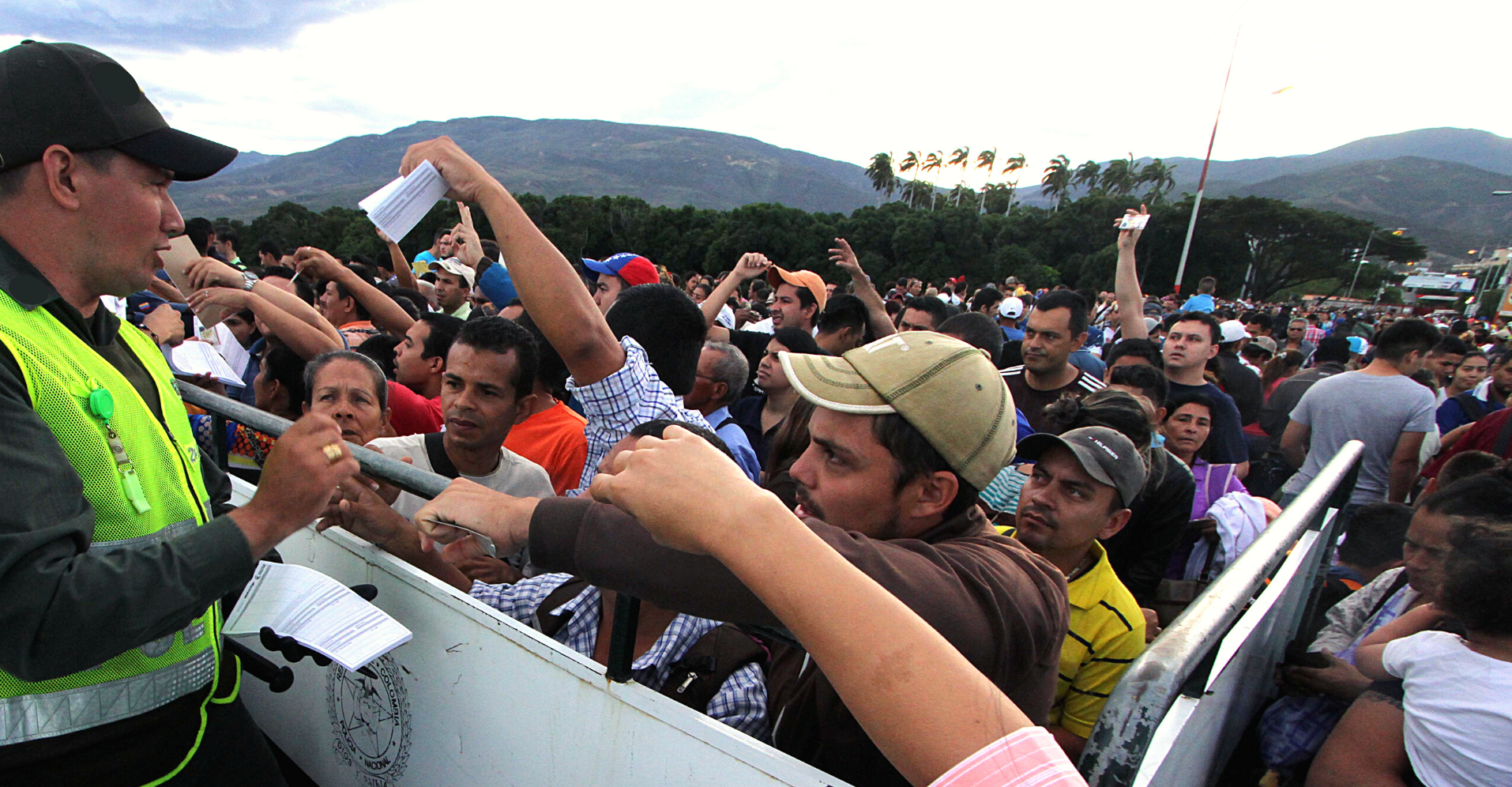 The largest movement of people in human history has coincided with COVID-19 and many other global challenges, such as environmental degradation, poverty, famine, and armed conflicts. The pandemic has greatly affected people’s movements due to the closure of borders. This forced immobility has put people on the move into unsafe, untenable situations.

Migrants and refugees must often cross through multiple countries, some with militarized borders, and may be refused entry. They frequently suffer violations of their rights; they face violence, smuggling, and family separations. Furthermore, criminal prosecution and detention for immigration violations deter migrants from seeking protection.

States frequently conflate national security with national defense and homeland security. However, national security is not solely about border control and is impossible without human security. The latter requires that the rights of all individuals present in a territory, regardless of their legal status, be safeguarded.

The Migrants and Refugees Section hopes to see more public policies adopted that are based on freedom of transit and respect for international protections for vulnerable people on the move. In line with such thinking, this bulletin seeks to reflect the Vatican’s position on the issue of migrants’ and refugees’ security at international borders and to present some Catholic actors’ initiatives aimed at facilitating their secure passage and their legal access to territories.

During his message for the 104th World Day of Migrants and Refugees, Pope Francis said that migrant safety must be paramount and articulated his message through the four verbs “to welcome, to protect, to promote and to integrate”. Welcoming means “offering broader options for migrants and refugees to enter destination countries safely and legally.” Humanitarian visas, family reunifications,  “community sponsorship programmes, and open humanitarian corridors for particularly vulnerable refugees” are the means he identifies to achieve such an outcome. He added that agents in charge of border control must be properly trained, so as to “prioritise personal safety over national security.” He also called for “alternative solutions to detention for those who enter a country without authorisation,” noting that “collective and arbitrary expulsions of migrants and refugees are not suitable solutions.”

In a statement on international protection, addressed in July 2021 to the 81st meeting of the UNHCR’s  Standing Committee, the Holy See’s Permanent Mission to the United Nations in Geneva reiterated the need for more generous resettlement policies, together with a “stronger commitment to responsibility sharing”, in order to assist the States hosting the largest numbers of refugees. The statement also remarked that the pandemic has “become a crisis of protection as well as another cause of delay in the achievement of durable solutions” for refugees. In that regard, while acknowledging states’ duty to protect their own populations during public health emergencies and respecting their exclusive right to manage their own borders, the Holy See noted some impressive demonstrations that public health concerns can go hand-in-hand with the respect for the principle of non-refoulement and the right to seek asylum enshrined in the Refugee Convention.

Participating in the “Working Group on the Smuggling of Migrants,” organized by the United Nations Office on Drugs and Crime in Vienna, Yuriy Tykhovlis made a statement on behalf of the Holy See’s Permanent Observer to the United Nations. He sounded the alarm about the so-called ‘surface’ and ‘dark’ web, “used to facilitate recruitment and transportation in the smuggling of migrants […] leading to their subsequent exploitation.” According to Tykhovlis, state and non-state actors should introduce mechanisms to increase transparency and combat illegal uses of technology. In addition, Tykhovlis called for the promotion of awareness campaigns and specific training programmes to contribute to the prevention of smuggling and to make migration safer, more orderly, and more regular.

In the document “Ensuring Access to Territory for Persons seeking International Protection”, the Migrants & Refugees Section of the Dicastery for Promoting Integral Human Development also reaffirms asylum and non-refoulement rights, stating that “secure admission to territory should be granted to all those in need of international protection, on an individual basis.” Whenever it is difficult to assess the migration status of individuals in situations of mixed migration flow, “temporary access to territory should be granted to all.” Analysing the COVID-19 emergency, the document finds that even necessary public-health measures must never be discriminatory and must only be “adopted after a fair assessment of the real risks.”

In the document “Alternatives to Immigration Detention”, the Migrants & Refugees Section remarks that “any person wishing to apply for international protection and exhibiting signs of physical or mental health problems, or having been trafficked, should never be detained in relation to their migratory status.” On these grounds, the document “calls for systematically exploring and adopting non-custodial alternatives to immigration detention,” such as non-governmental reception centres and other community-based placement programmes. These solutions ensure better protection of the rights and dignity of irregular migrants. In addition, they are more effective and less expensive, although they are intended to be temporary.

The Humanitarian Corridors project of the Community of Sant’Egidio grants people in vulnerable conditions legal entry into Europe through humanitarian visas and the opportunity for subsequent asylum application. Since the beginning of the programme, 3,700 refugees from Lebanon, the Horn of Africa and the Greek island of Lesbos have been received and integrated in Italy, France (FR), Belgium, San Marino, and Andorra. In 2021 alone, the Community of Sant’Egidio signed two protocols with the Italian Government for the arrival of 1000 refugees from Lebanon and 1200 Afghan refugees through Humanitarian Corridors, and renewed the protocol with the French Government to welcome 300 refugees. Finally, the Community of Sant’Egidio in Mexico organised a first humanitarian corridor for a group of Guatemalan children, accompanying them from southern Mexico to the United States to be reunited with their families.

MigraSegura is a digital platform that helps people on the move, especially Venezuelans, find safe and reliable information about basic services and migration policies in Brazil and Ecuador. The platform (ES; PT) provides information on migration policies; legal processes to obtain asylum, refuge and access to humanitarian assistance; and livelihoods, medical care, hostels, food, and the like. Access to the platform is facilitated through Church social spaces and pastoral services, where Wi-Fi and electronic devices are provided. Migra Segura is an initiative of Caritas Brasileira in alliance with Caritas Ecuador, with the support of Catholic Relief Services.

Community Sponsorship is a safe and durable solution to welcome and resettle refugees. The community assumes responsibility for a refugee family, from first arrival through to settled independence as part of their local community. In Canada – which leads the world in terms of refugee resettlement numbers – the Catholic Centre for Immigrants (CCI) operates two sponsorship agreements: the Roman Catholic Episcopal Corporation of Ottawa’s sponsorship agreement, which mostly serves local parishes, and a second sponsorship agreement for CCI itself, which serves groups of any affiliation. In another example, the Roman Catholic Diocese of Saskatoon, as a Sponsorship Agreement Holder with the federal government, helps parishes and other groups to privately sponsor refugees, offering training and coordination. The average time from when a parish agrees to sponsor a refugee or refugee family until their arrival is from 1.5 to 2.5 years. The COVID-19 pandemic has affected the process and caused some additional delays and uncertainties. Still, people have been able to settle in after a successful quarantine period.

The University Corridors for Refugees project, promoted by Caritas Italiana together with other partners, issues entry visas for study purposes for persons with international protection status in Ethiopia. Motivation and academic record are considered for applicants seeking to enrol in degree courses at various Italian universities. The latter are responsible for the registration of the beneficiary in a course of studies, and for assuming the costs of food, accommodation, and tuition. Caritas Italiana publicizes the call for applications in Ethiopia, assists with preparations, and covers pre-departure and flight costs. It also contributes financially to diocesan Caritas organisations, and provides project management when the beneficiaries reach Italy. Diocesan Caritas organisations have the important role of supporting the social integration of the student beneficiaries of the project.

In an interview with Crux, Msgr. Robert J. Vitillo, Secretary General of the International Catholic Migration Commission (ICMC), said “when people are forced to flee because of war, discrimination, persecution, or abject poverty, walls will not stop them.” However, what shocks him more are the walls of indifference that some people, including believers, build in the face of migrants’ “horrible pain of drowning, hunger, and thirst during their search for security, freedom and new opportunities.” He wants people to “overcome the false concept and attitude that migrants and refugees are a ‘burden’ to high income countries” and instead to recognize “the gifts and economic growth potential brought by migrants and refugees,” as witnessed in some rural areas and in low- and middle-income countries. While some might disagree that ICMC experience demonstrates that legal pathways plus sponsorship and resettlement constitute the best answer to deal with the emergency in the short term, Msgr. Vitillo points out that a radical change “toward an ever wider ‘we’” and building of peace, both from the “top-down” and the “bottom-up”, are essential to “eliminate most of the root causes behind forced displacement of peoples.”

In a short reflection, Peter Rožič SJ, Director of the Jesuit European Social Centre, talks about climate change as “one of the greatest global security risks”, whose causes and effects are slow-moving and difficult to notice, and for this reason too often underestimated. Nonetheless, this issue puts human security at risk from several perspectives, “by causing not only famine, poverty, housing crises and (forced) migration, but also the loss of entire territories and political conflict.” Finally, Rožič remarks on the Pope’s ability to present the environmental crisis as a socio-political crisis, and his impact in involving global leaders, as well as the business world, in the commitment of addressing the climate emergency.

A report released in April 2021 by Jesuit Refugee Service USA and Georgetown University’s Institute for the Study of International Migration, entitled “Seeking Protection in a Pandemic: COVID-19 and the Future of Asylum”, finds that restrictions put in place to protect public health during the pandemic will have long-lasting impacts on global asylum policies, and that such restrictions amplify inequalities between displaced and host populations. The report reveals that people seeking safety from persecution and violence have not been able to do so legally over the last year. Indeed, 167 countries closed their borders, even to asylum seekers, in response to the first COVID-19 outbreak in early 2020, and as of March 2021, there were still 57 countries where access to the territory was denied with no exceptions. The report includes some recommendations to policy makers, including ensuring secure and legal pathways, ceasing the detention of children, and increasing investment in asylum systems.

The Journal on Migration and Human Security of the Center for Migration Studies offers several articles and studies on “human security.” They touch on the topics of creating secure and sustaining conditions in migrant sending communities; promoting safe, orderly and legal migration; and developing rights-respecting immigration and immigrant-integration policies that benefit sending and hosting communities and allow newcomers to lead productive, secure lives.