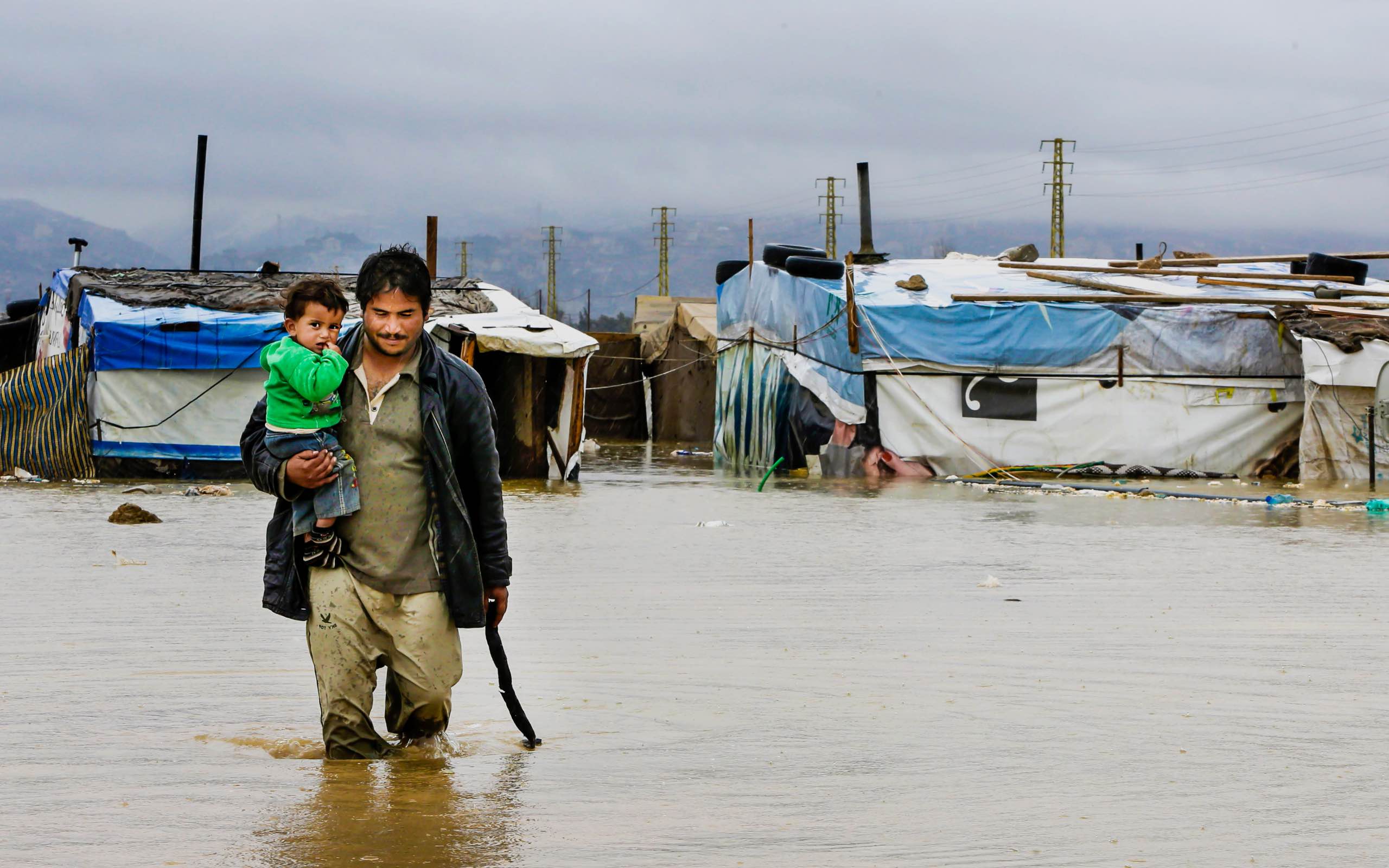 Crises in nature and displacement

Climate change contributes to large-scale human migration as it results in a scarcity of essential resources, increased frequency of extreme weather events, and so-called slow onset events. Weather-related crises have triggered more than twice as much displacement as conflict and violence in the last decade, according to UNHCR and the Internal Displacement Monitoring Centre (IDMC).

The current development model sees humanity as the owner and ruler of nature, which may be exploited without limits. This modus operandi widens inequalities and intensifies social exclusion. Although the environmental crisis affects everyone, it has a greater impact on vulnerable populations, whether in terms of limited access to clean water, food scarcity, agricultural products spoilage, or violent conflict. The degradation of the ecosystem is also a social degradation, and is a significant push factor in human migration patterns.

The building of a healthier and more welcoming and therefore more equal world depends on effective public policies that offer responses to the many aspects of the climate crisis, including migration. Coordinated action is needed to ensure that environmental challenges are recognized and addressed in a way that protects peoples’ rights, reflects their needs and aspirations, and provides for a sustainable future.

The Catholic Church feels care for  the earth and all those who have been displaced due to the climate crisis. This bulletin presents some good examples.

The Holy See’s commitments in response to the climate crisis

The Holy See’s efforts to deal with climate change have been underway for some time, through important efforts to promote “a culture of care”. The landmark of that commitment is undoubtedly Laudato si’ (2015). In that Encyclical, the Holy Father relates the issues of climate change, poverty, and migration: “There has been a tragic rise in the number of migrants seeking to flee from the growing poverty caused by environmental degradation. […] Our lack of response to these tragedies involving our brothers and sisters points to the loss of that sense of responsibility for our fellow men and women upon which all civil society is founded.”

Laudato si’ has given life to various movements and initiatives within the Catholic world aimed at putting into practice the message of the encyclical. Among them are the Global Catholic Climate Movement and the Laudato si’ Action Platform (LSAP), launched by the Dicastery for Promoting Integral Human Development in May 2021. The path sketched out there involves dioceses, parishes, ecclesial and lay groups, but also hospitals and care centres, businesses, farms, schools and universities, institutes and religious orders, all called to adopt sustainable lifestyles. The journey of the LSAP will take place over seven years and the Dicastery has proposed seven goals based on Laudato si’: the Response to the Cry of the Earth, the Response to the Cry of the Poor, Ecological Economics, Adoption of Simple Lifestyles, Ecological Education, Ecological Spirituality, and Community Involvement and Participatory Action.

In December 2020, Pope Francis sent a video message to participants in the UN’s High Level Virtual Climate Ambition Summit. On that occasion, the Holy Father remarked that climate change, as well as the pandemic, has ethical, social, economic, and political implications, as well as environmental. These crises “affect above all the life of the poorest and most fragile”, and therefore “they appeal to our responsibility to promote, through collective and joint commitment, a culture of care, which places human dignity and the common good at the centre.”

In May 2021, Archbishop Ivan Jurkovič, Permanent Observer of the Holy See to the United Nations, addressed the International Dialogue on Migration of the International Organization for Migration Panel, highlighting the impact of climate change and the ecological crisis on millions of persons living in poverty worldwide. Jurkovič pointed out that “while climate change occurs everywhere, the capacity to respond and adapt to it varies greatly. It is the poor and most vulnerable who are disproportionately affected by the ecological and climate crises.” It is vital, he said, to acknowledge that the climate crisis has a human face. Jurkovič also stressed that the issues of migration and of climate change require a collective and coordinated response by the international community: “no single State alone can manage their consequences.”

Finally, the Pastoral Orientations on Climate Displaced People (POCDP), by M&R Section of the Dicastery for Promoting Integral Human Development, is a guide to understanding the challenges posed by climate disruption and the pastoral care that ought to be offered to climate-displaced people. The booklet highlights ten challenges pertaining to climate change displacement and its victims, and suggests appropriate pastoral responses. The document is available in English, Spanish, Italian, French, Portuguese, and soon also in Arabic and German.

A culture of care to address the climate displacement

To face an issue as complex as climate displacement, the Catholic Church is involved on several fronts. For some good examples of that hard and valuable work, the M&R Section has published a collection of initiatives undertaken by the Catholic Church at different levels in response to climate displacement. The publication follows from a collaboration with a variety of Catholic actors in the drafting of the POCDP. Indeed, these good practices are categorized on the basis of the ten action points identified in the POCDP. The anthology is not a finished product, but constantly updated with the addition of new initiatives.

The first step towards addressing climate displacement consists in raising awareness of the impact of climate change and environmental degradation on migratory movements. In that regard, FOCSIV e GCAP Italia released a video on climate change and migration, showing how the effects of climate change worsen the living conditions of the most vulnerable populations. To many, the displacement of people due to deteriorating climate conditions or extreme weather events might look like something normal and inevitable, but it is not. As explained in the video, it’s a question of climate injustice. For that reason, it is necessary to adopt choices that respect the environment and the human rights of its inhabitants, such as encouraging ecologically responsible transactions in trade or investment, and protecting and improving the resilience of vulnerable communities.

Earlier approaches towards climate displacement mainly tended to respond to individual environmental disasters as they occurred. A preventive approach is now emerging, especially in the Catholic sphere, with a priority on dealing with the harmful effects of the environmental crisis on people. As an example, with the approval of the local diocese, Manos Unidas together with TREE Trust has launched a training project on organic and sustainable farming techniques (ES) in Pudukkottai, a district in southern India officially declared a “drought zone”. The lack of water is creating a difficult situation for the rural populations, which are forced to migrate and are condemned to eking out a meagre living in the cities. Thanks to that project, small local farmers are instructed in ways to improve the use of rainwater and to revitalise native seeds that require less water. As a result, over 5000 native plants have been sown, community seedlings and traditional seed banks for local farmers have been created, and 11 ponds were restored and expanded.

Climate change is causing more frequent and intense weather events, leading to forced displacements. There were at least 55 million internally displaced people by the end of 2020, according to IDMC. These numbers, in a time of pandemic, make assistance responses even more arduous but also more urgent. The Catholic Church’s presence on the ground turned out to be crucial in providing a first response, but also seeking long-term solutions for the victims of climate displacement. After floods and landslides triggered by tropical cyclone Seroja killed over 42 people and displaced some 9,700 in Timor-Leste, the Catholic Church immediately started to provide assistance. The Timorese Episcopal Conference (CET) mobilized all priests and religious to meet the most immediate needs. The Salesians’ Don Bosco Training Centre Comoro was set up as a major relief centre, offering shelter and food for those who have lost their homes and possessions. The Jesuits too have been supporting communities in six informal evacuation centres, providing mattresses, bedsheets, food, and kitchen and cooking utensils for 100 households. The Church in Timor-Leste is also working with the government to help repair houses damaged by flash floods. The Church’s social arm Caritas has set a goal of 58 houses, while CET helped to buy building equipment and provide logistical assistance for the victims.

A call to act for a healthy common home

In an interview with Crux, Father Joshtrom Isaac Kureethadam – Coordinator of the “Ecology and Creation” section of the Vatican Dicastery for Promoting Integral Human Development – affirmed it was “unfortunate” that many are skeptical about the anthropogenic origin of the ongoing climate crisis. He argued that the resistance to acknowledging this “is engendered mainly by vested economic interests and in some cases also by partisan ideologies.” Speaking about his own ecological conversion, Fr. Kureethadam recounted how he “came in contact with the immense suffering that the ecological crisis is bringing especially to the poor and most vulnerable” while working in a mission area in India. “I lived and served in an area where there were (and unfortunately [are] even now) the tragic cases of farmers committing suicide as their crops failed year after year due to droughts and other climate triggered natural disasters.”

Chiara Martinelli, senior adviser at CIDSE, called for more ambitious climate actions in this time of the COVID-19 pandemic, which represents a tipping point, but also a moment of reflection and learning. “While we pause our lifestyles to slow during the COVID-19 crisis, it has been impossible to ’pause’ the permanent state of climate crisis lived by the world’s most vulnerable and poorest communities.” The health crisis confirmed the failure of the current dominant economic system and proved “there is no healthy humanity on a sick planet. Climate ambition must therefore restore a peaceful coexistence of nature and humanity on our planet.” To this end, she pointed out, “we need a clear, holistic approach, [and] policy coherence across sectors and at all levels, that can join forces to shape a new paradigm where people and planet are the central priority.”

In their message for Pentecost 2021, the Bishops of  England and Wales focused on the protection of the environment. The Pastoral Letter was an invitation for Catholics across the UK to play a part “in the routines, choices and decisions of our everyday lives and our aspirations for the future”. They recalled that “the way we live our everyday lives has an impact on everyone and on the earth”, especially in the poorest countries. Despite the undeniable responsibility of nations, the Pastoral Letter remarks that the healing of our common home and the wellbeing and care of all, especially the poor and the marginalised, cannot be left “merely to a response from industry and governments.”