“May the Lord restore our sight, so as to rediscover what it means
to be members of the human family” (Pope Francis)

Against human trafficking and violence against women

On 25 November, the Day Against Violence Against Women, Pope Francis reiterated his insistent call to stop perpetrating violence. “Too often,” he tweeted, “women are insulted, beaten, raped, forced to prostitute themselves… If we want a better world, that will be a peaceful home and not a battlefield, we all need to do a lot more for the dignity of each woman”. In his homily for New Year’s Day 2020, the Holy Father had said: “Every form of violence inflicted upon a woman is a blasphemy against God, who was born of a woman” and “we can understand our degree of humanity by how we treat a woman’s body.”

In Myanmar, the pandemic has exposed the plight of the poorest women and girls, who have been disproportionately affected by the emergency. Since the start of the pandemic, poverty has forced hundreds of women in Myanmar’s cities into the sex trade, where they suffer exploitation and abuse. The Myanmar Jesuit Mission (MJM) works to support women and girls, through livelihood training in the slums of Yangon and in camps for displaced people, and strives to prioritise  education for girls in Kachin State. Then, MJM is committed in supporting women who have been forced by poverty into prostitution. To this end, they have distributed food parcels and, over the coming months, the women will be offered skills training and microcredit loans. The goal is to empower the women and offer them a route out of the sex trade, leading to a safer and more secure future for them and their children. In the town of Myitkyina, MJM works closely with women’s groups in two IDP camps, focusing on education and giving support to the most vulnerable families. In September, an intensive 8-week sewing and tailoring course was offered to women in the camps to equip them with much-needed livelihood skills.

In Spain, the exploitation of women (ES), who have been left without income as a result of the crisis, is occurring in worrying numbers. These women, mostly migrants, had largely been employed in services to the elderly or in domestic services, with “more or less legal” contracts, explains Ana Almarza, a Sister Adoratrice and director of the Proyecto Esperanza (ES). There are also cases of forced labour (child care, housekeeping, etc.) in exchange for the non-divulgation of irregular residency situations. During this pandemic, Proyecto Esperanza has developed an emergency aid programme that aims to prevent hunger and desperation from leading women into slavery, and participates in the Church alert network on possible exploitation cases. “The Church is very sensitized; it is working very well and in a very professional way,” Sister Almarza notes. The women participating in Proyecto Esperanza are assisted by psychologists, therapists, social workers, educators, and lawyers. A team of 25 women who “combine professionalism and mysticism” addresses each case individually. Dealing as they do with women who have been victims of a crime and deception, the team works on restoring trust and building bonds with them.

The 16 Days of Activism against Gender-Based Violence is an international campaign to challenge violence against women and girls. This year, the global campaign is focused on the theme “Orange the World: Fund, Respond, Prevent, Collect!”. The  COVID-19   has  exacerbated  key  risk  factors  for  violence against women and girls,  such  as  food  shortages, unemployment, economic insecurity, school closures, massive migration flows and the threat of civil unrest. A particular focus is paid to informal women workers whose lives and livelihoods have been acutely impacted by the pandemic. The theme of the campaign puts the most vulnerable in the foreground. In particular, refugees, migrants, minorities, indigenous peoples and populations affected by conflicts and natural disasters. Australian Catholic Religious Against Trafficking in Humans also joined the 16 Days initiative, offering two online events, stories of activism, a reflection sheet, and a toolkit to invite communities to take an active part in the campaign.

Natural disasters have been occurring with increasing frequency in different parts of the planet and the highest price, as is most often the case, is paid by the most vulnerable and poorest populations, displacing those who depend on agriculture and who live in slums and makeshift shelters.

Typhoon Goni, the most powerful in the world in 2020, killed at least 20 people and forced approximately 350,000 from their homes in the Philippines. Local Churches have thrown open their doors to offer shelter. The parish of Father Treb Futol of Sorsogon Diocese set up a soup kitchen and fed evacuees who fled their homes. Caritas Philippines’s director Bishop Jose Colin Bagaforo said the Church’s social arm has been coordinating with local Caritas offices to distribute relief goods. Meanwhile, Caritas Manila sent a million pesos (IT) (a value of approximately 17, 000 euros), in aid to the dioceses most damaged by the typhoon.

Not far away, Vietnam’s central region has been battered by 7 tropical storms and typhoons, causing widespread floods and landslides that killed more than 200 people, damaged more than 400,000 homes, and devastated farming. Caritas has already taken steps to provide immediate survival help, and to assist in rebuilding homes and restoring livelihoods after the emergency phase. Priests were actively involved in bringing food and relief to the affected people and moving them to temporary shelters.

Within a fortnight, two powerful hurricanes, Eta and Iota, struck Central America. Caribbean coastal Indigenous communities were among the hardest hit by Eta’s strong winds and floodwaters. Many of their homes were destroyed. Nicaraguan farmers lost most of their crops. Catholic Relief Services, the U.S. bishops’ foreign relief agency, is providing funds for immediate assistance to the families that have been so badly affected. The relief agency aims to provide cleaning supplies and toilet paper to local residents, rebuild homes, and help farmers recover. Within Nicaragua, the faithful offered their help (IT; ES; FR) through their parishes for the victims of hurricanes Iota and Eta, after an appeal for support was launched by Cardinal Leopoldo José Brenes Solórzano. In his Sunday homily, broadcast by the Catholic media from his home in Managua, he asked the faithful for “generosity without much propaganda, humble and simple, without seeking any recognition”. For its part, Caritas (FR) launched three aid projects in Honduras, Guatemala, and Nicaragua to support the population in the next two months. It plans to provide food and drinking water, strengthen anti-COVID safety measures, and contribute to the reconstruction of houses.

In Africa, the worst flood of the last 40 years struck South Sudan. Due to the dangerous rise in water levels, people living on islands were forced to leave their homes, crops, and livelihood, and to seek refuge in church and school premises. The Society of Missionaries of Mary Immaculate (MMI), ministering in South Sudan’s Archdiocese of Juba, with support from the Catholic Agency for Overseas Development (CAFOD), has provided food and torches to hundreds of flood-affected populations occupying a parish compound in Juba. “We have given 25 kilograms of rice, 10 kilos of beans, 5 kilos of sugar, 5 litres of oil, 2 kilos of salt and one torch for each family,” the parish priest of St. Francis of Assisi, Fr. Rayappan Jayaprakash said to ACI Africa. He revealed that “the number of people that benefit from our assistance is 100 households with around 700 people chased by floods from the western side of the River Nile.”

Books from the Church

Leaving the sex-trafficking network can be a daunting and often dangerous experience for survivors. But migrant survivors face additional obstacles to building a dignified life. These include their migration status, language barriers, low levels of education, and unwelcoming communities.  Without appropriate opportunities for integration into society, the probability that they will be revictimized and/or return to trafficking circles is high. The “Right Way” handbook is a comprehensive new guide that facilitates the re-integration of human trafficking survivors by identifying their needs and recommending appropriate services for NGOs, state agencies, and communities. The guide produced by ICMC Europe includes tools, concrete examples of good practices, lessons learned from pilot projects, input from survivors, and recommendations. The main section of the handbook describes the different services necessary to achieve integration, dividing them into psychosocial support; vocational training and labour autonomy; and awareness-raising services in communities.  “Although there are general themes and steps towards integration, the process will look different for every survivor. That’s why a person-centred approach is key ― taking into consideration the needs, desires, and limits of each individual,” says ICMC Europe project officer Abigail Maristela.

Raffaele Luise’s latest reflection addresses the encyclicals of Pope Francis Laudato si’ and Fratelli tutti. It is published by Intermedia Edizioni with the title “Una nuova Innocenza” (IT) (A New Innocence). Though it may seem paradoxical, this time of pandemic is showing us the way to “a new innocence”. “Innocence”, explains the Vatican specialist, means first of all “do not hurt, do not harm”. There is a need not to harm nature and all its living creatures, for it is a single universal family as the Pope says in Laudato si’. And with Fratelli tutti there is an affirmation of universal brotherhood. The two encyclicals fashion a project for integral ecology — as Pope Francis calls it — where a renewed relationship of dignity and mutual affection between human beings and nature is established. Cardinal Francesco Coccopalmerio calls it “a text of aesthetics and beauty, of poetry” in the preface which he wrote together with Cardinal Walter Kasper, the president emeritus of the Pontifical Council for Promoting Christian Unity. “What I would like to emphasise more,” he continues, “is that, in connection with the teaching that should come from this pandemic, we need others. We are not enough… we need our neighbour. And when I say ‘neighbour’, I am not just referring to people but also to creation.” 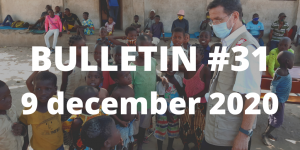