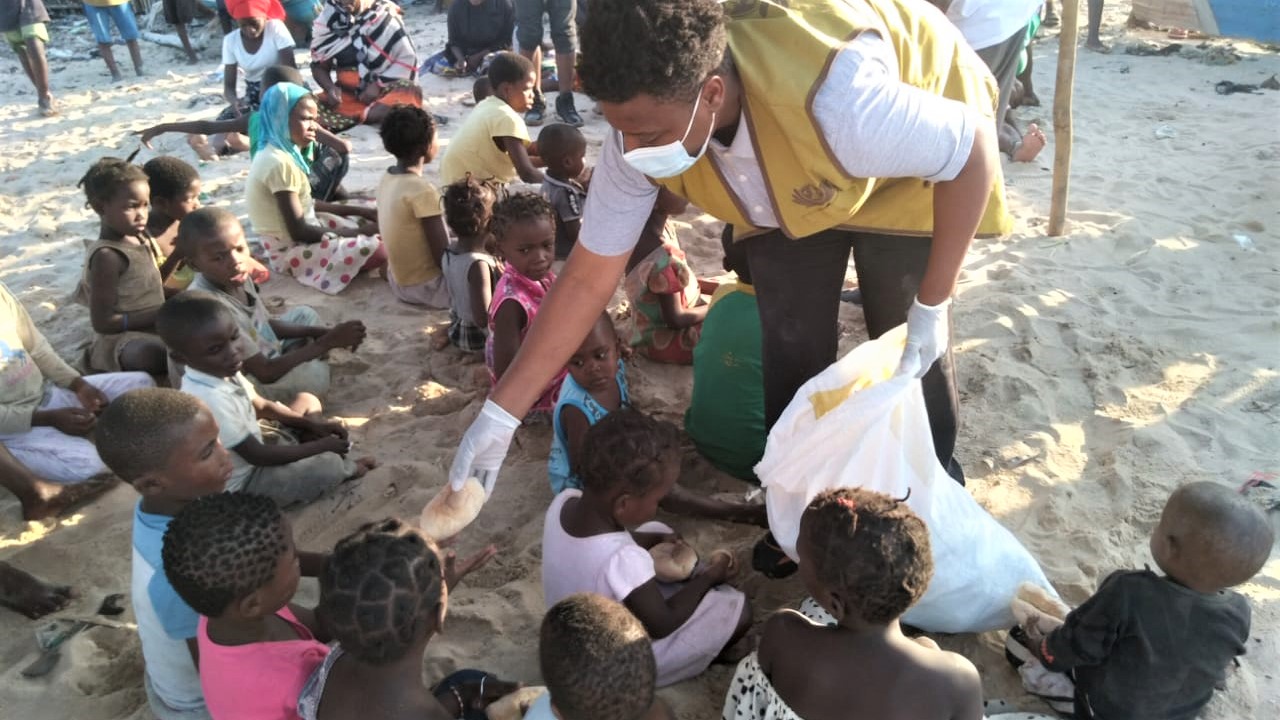 “May the Lord restore our sight, so as to rediscover what it means
to be members of the human family” (Pope Francis)

The ecclesial network Migrantes con Derechos has repeatedly denounced the desperate conditions in which migrants live in Melilla, an autonomous Spanish city on the north-east coast of Morocco. Their living quarters are overcrowded, with only one bathroom and two showers for more than 100 people. “The more time passes, the more the structures deteriorate,” says Marisa Amaro. She is one of the Sisters who is part of an inter-congregational community—formed by the Apostles of the Sacred Heart of Jesus and the Sisters of the Holy Guardian Angel—that runs the Geum Dodou Association, which welcomes and accompanies migrants arriving in the city. In collaboration with SJM and Caritas, they currently support about 80 people. They help the migrants (ES) to apply for residence, asylum or refuge; they teach them Spanish and help them to integrate; they provide information about the true present situation in Europe. Because COVID-19 has spread in the Immigration detention centre (CETI), hundreds of people had to be isolated and confined in unlit and poorly ventilated sections of one centre. This has led to tensions and riots within the centre, which resulted in several people being detained and imprisoned.

Thanks to funds from Catholic Near East Welfare Association, the Social Service Society (SEVA) of the Syro-Malankara Catholic Eparchy of St. Ephrem, in India, has undertaken to support as many vulnerable people as possible during the COVID-19 pandemic. The initiative has focused on migrants, unorganized workers and people with special needs. The eparchy has been providing food to the needy, and community kitchens have been set up with attention to appropriate social distancing and hygiene norms. SEVA also distributes dry ration kits, medicine and hygiene kits, while conducting awareness sessions on social distancing and basic hygiene measures.

The Outreach Ministries of the Diocese of London, Canada, have been addressing the essential needs of extremely vulnerable populations of migrants and refugees. Refugee sponsorship applications continued virtually during the pandemic; this is in the context of a planned annual allocation of 300 refugees by the national immigration department. The Refugee Ministry succeeded in completing application submissions via email and phone calls and was able to do more check-in calls and have more conversations with vulnerable families than in normal times. In partnership with the Community Refugee Fund (CRF), the Migrant Worker Ministry helps migrant farm workers impacted by COVID-19 by giving them financial aid to help them pay the initial application fees or renewal fees for their work permits and by distributing aid packages to over 120 individuals in need. The CRF also helped fund an initiative to distribute refurbished laptops to over 40 refugee claimants to help them remain connected and access online information. Finally, the Diocese of London published a paper for parishioners to indicate ways to welcome, protect, promote and integrate migrants and refugees as advocated by Pope Francis.

Advocating a welcome for migrants, not detention

Immigrant detention centres in some countries closed in the spring of 2020 due to the pandemic, as overcrowding and poor hygiene and sanitary conditions made those structures vulnerable and potential COVID-19 clusters. These closures were welcomed by Catholics who help to receive migrants and asylum seekers; indeed, they hoped this would lead to finding long term alternatives to detention. Unfortunately, some countries have reopened these centres, and Catholic groups are responding.

The director of the Jesuit Refugee Service Europe, José Ignacio García SJ, said in an interview with ECCLESIA (PT) that EU policies on the reception of migrants and asylum seekers must take a human and supportive approach. “States have the right to control borders […]. The important thing is how we treat people: the conditions under which they are retained, and if the procedure is right,” he said. In this context, Fr. Garcia underlines the importance of the new encyclical, Fratelli Tutti, which shows “how badly” humanity works and how great is the need for a prophetic vision that promotes a “fraternal and human” society. Claudia Bonamini, responsible for advocacy at JRS-Europe, questions the EU Pact on Immigration and Asylum for its focus on “borders” and not on true solidarity between states and shared processes for welcoming these people. She decries the continued use of lengthy detention “in inhuman conditions”. In this regard, the JRS UK office recently produced a report entitled “Detained and Dehumanized: The Impact of Immigration Detention”, documenting the effects detention on immigrants and denouncing the fostering of a “culture of death” by Britain’s immigration detention system.

The Spanish Ministry of the Interior decided to reactivate the Detention Centres for Foreigners (CIE). In an interview with Alfa and Omega (ES), Ivan Lendrino, coordinator for the CIE issue in the Jesuit Migrant Service, expresses concern on the decision to put the centres back into operation without being ready and without protocols for preventing the spread of COVID-19. “In the seven months without CIE, nobody has missed them. It makes no sense to reopen them and to intern migrants,” he explains. In a joint communiqué (ES), more than 200 diverse organizations, a great many of them Catholic, strongly opposed the CIEs as “disproportionate and unjust”. The statement highlights how these centres deprive many people of their freedom “for the simple fact of migrating, in a legitimate search for a better life, or fleeing from situations of persecution or real danger, and which entails detention in a structure absolutely inadequate and detrimental to the dignity of human beings.”

One of the three documents on migration issues by the Vatican COVID-19 Commission is dedicated to alternatives to detention (IT; ES). It states that “any person wishing to apply for international protection and exhibiting signs of physical or mental health problems, or having been trafficked, should never be detained in relation to their migratory status.” In this time of pandemic, it is worrisome that the spread of the virus “has dramatically amplified and multiplied existing challenges, weaknesses and abuses characterizing most detention centres around the world. This includes chronic violence, overcrowding, limited access to basic services, including health, and a culture of disrespect and dehumanization.” For these reasons, the Migrants and Refugees Section of the Holy See, which authored the document, recommends the systematic adoption of non-custodial measures as alternatives to detaining migrants. Pending adoption of definitive administrative procedures, these temporary measures could include placing migrants with individual families, in community-run reception centres or in self-managed housing programmes.

Fratelli Tutti: the encyclical’s vision of the vulnerable on the move

Pope Francis devotes an entire section of Fratelli Tutti – subtitled ‘An Absence of Human Dignity on the Borders’ – to the current migration crisis. “Unnecessary migration needs to be avoided,” he affirms, “by creating concrete opportunities to live with dignity in the countries of origin. But at the same time, we need to respect the right to seek a better life elsewhere.” He adds: “Migrants are not seen as entitled like others to participate in the life of society, and it is forgotten that they possess the same intrinsic dignity as any person […] No one will ever openly deny that they are human beings, yet in practice, by our decisions and the way we treat them, we can show that we consider them less worthy, less important, less human.” The Holy Father is certain that “migrations, more than ever before, will play a pivotal role in the future of our world,” and for this reason he asks everyone to move beyond “our natural instinct of self-defence.” He concludes: “there is a problem when doubts and fears condition our way of thinking and acting to the point of making us intolerant, closed and perhaps even – without realizing it – racist. In this way, fear deprives us of the desire and the ability to encounter the other.”

Sarah Teather, director of Jesuit Refugee Service UK (JRS UK), said that the Pope’s words in the encyclical Fratelli Tutti are “paramount in today’s political climate, especially in the UK.” She told Crux that the Holy Father “calls for migrants and refugees to be ‘agents in their own redemption’ who are allowed the opportunity to participate and afforded the same dignity and worth as anyone else. He highlights that our treatment of migrants and refugees is indicative of the wider lack of human fraternity and reminds us that people can only be fruitful and productive if they are open to others.” The disregard for human rights is on the rise, judging by the cruel and damaging process of seeking asylum in the UK experienced by those accompanied by JRS. She underscores Francis’s use of the Good Samaritan parable as a framing device for Fratelli Tutti: “Pope Francis reminds us how we ought to treat our neighbours – including our refugee brothers and sisters – with fraternal love.” A welcoming attitude towards asylum seekers and other marginalized people is good for society as a whole by increasing “social friendship and peacebuilding.” And she adds: “We need to seek to restore dignity and enable those pushed to the perimeters to be protagonists in society. Peace is not possible where there is inequality and a lack of integral human development.”

Fratelli Tutti has received the acclaim of numerous actors both within and outside the Church. This is favourable to ecumenical encounter and cooperation with different stakeholders on the matters it raises. An example of this is the Pope’s meeting with Peter Maurer (IT; FR; ES; PT), President of the International Committee of the Red Cross. Maurer pointed out that the encyclical’s title echoes the statement of women volunteer medical workers on an 1859 battlefield who helped “tutti fratelli” (all brothers and sisters) regardless of their allegiance, and this led to the creation of the International Red Cross some years later. For Maurer, the Holy See and the Red Cross are united by the common need to “fight against the fragmentation of society – about divisions, which are so painful in its consequences for civilian populations, for the most vulnerable, for the migrants, those displaced by war and violence, those affected by the weaponization of societies, those affected by climate change, by underdevelopment, by exclusion, by poverty, by injustice.” It is therefore fundamentally important to develop a counter-narrative that offers the vision of a different, inclusive society that builds bridges where reality divides societies. “This is at the core of our common view and endeavours. We certainly are very proud to be next to the Vatican and next to the Pope in his efforts,” declared the Red Cross President. 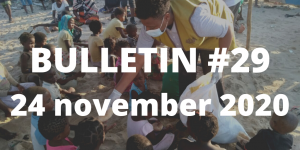