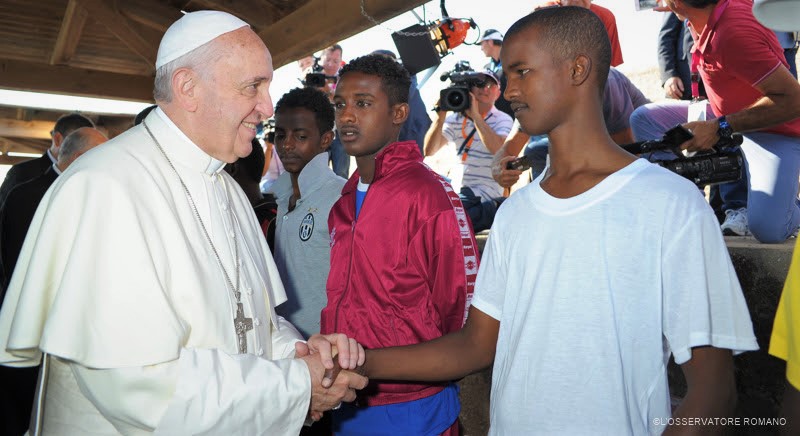 Towards a migration global governance

The Global Compact on Refugees (GCR) and the Global Compact for Safe, Orderly, Regular, and Responsible Migration (GCM) were adopted at the end of 2018, after two years of wide-ranging UN consultations and negotiations. The two documents were born out of the conviction that a sustainable solution to refugee and migrant situations cannot be achieved without international cooperation. At the same time, national migration policy and practice remain difficult; they can be diverted by emotion-charged controversy — as shown by the fact that several countries which had actively participated in the whole process of drafting the GCM withdrew when it came to signing it.

The Global Compacts are not binding. They identify principles and objectives and methodology to implement them, leaving to signatory States the key initiative to put them into action. Being controversial, their implementation is often not publicized.

Many countries nowadays are following a strategy of externalizing migrant and refugee flows far from their borders, to the point of providing funds to other countries. This allows them to avoid direct responsibility, relying instead on agreements that block migration, sometimes indefinitely. The pandemic has also brought other domestic problems to the political agenda, often at the expense of the challenges that migrants and refugees have had to face due to the COVID-19 emergency.

The Catholic Church is eager to play a proactive role in the promotion of migration global governance, first at the local level but also regionally and internationally. This bulletin relates some of the main recent undertakings of the Holy See in this direction, and introduces some Catholic actors’ initiatives that can serve as examples of concrete steps towards effective global migration governance.

In 2018, the Holy See formally submitted 20 Action Points for the Global Compacts to the United Nations and the Member States, as its contribution to the drafting, negotiation, and adoption of the GCR and GCM. The 20 points are grounded in the Church’s best practices for responding to the needs of migrants and refugees at the grassroots level and are based on consultations by the Migrants & Refugees Section with various Bishops’ Conferences and Catholic NGOs working in the field. In accordance with Pope Francis’s teaching, the points are grouped around four verbs — to welcome, to protect, to promote, and to integrate — with the ultimate goal of building an inclusive and sustainable common home for all.

In the paper “Alternatives to Immigration Detention”, the M&R Section suggests non-custodial alternatives to immigration detention, such as non-governmental reception centres and other community-based placement programmes, to ensure better protection of the rights and dignity of irregular migrants and to put objective 13 of the GCM into practice. The Section also addressed the issue of regularisation of migrants as a special and speedy measure to quickly restore their dignity and make it easier to have a decent life. Such a measure provides a conducive environment for the development of immigration and integration policies consistent with the model of shared governance envisioned in the GCM.

In his video message to the 75th Session of the United Nations General Assembly in September 2020, Pope Francis remarked that the two Global Compacts on Refugees and on Migration, despite being praiseworthy and valuable, still “lack the necessary political support to prove successful.” He also spoke about the tendency of States towards a “declarationist nominalism” and even “to shirk their responsibilities and commitments”, in contrast to a “truly effective struggle” against contemporary scourges, such as the migrant and refugee crises. Nevertheless, the Holy Father sees in the current crisis “an opportunity for the United Nations to help build a more fraternal and compassionate society.”

Archbishop Gabriele Caccia, Apostolic Nuncio and Permanent Observer of the Holy See to the UN, also attended the 75th Session of the United Nations General Assembly and took the floor during discussions of the Second Committee’s agenda item “Globalization and Interdependence”. On that occasion he said: “The Holy See strongly encourages all States and civil society to continue to reaffirm the values of the Global Compact for Migration and its comprehensive framework of best practices and policy instruments to increase international cooperation and sharing of responsibility in the governance of migration in all its dimensions.” At the same time Archbishop Caccia stressed that international cooperation should work to ensure that “emigration will not be the only option left for those who seek peace, justice, security and full respect of their human dignity”, and to support the positive role that migrants already play in the economies of their countries of origin, transit, and destination, thus promoting global development.

Dr. Francesca Di Giovanni, Undersecretary for the Multilateral Sector, Section for Relations with States of the Secretariat of State, took the podium at the 72nd Executive Committee of the UN Refugee Programme. In her statement, she described the refugee issue as a “crisis in solidarity”, one that challenges “our conscience as a family of nations”. Countries should “look for strategies that engage everyone as equal partners”, as stipulated by the GCR. Di Giovanni warns that the Compact “will only succeed if it garners the necessary political will”. In that regard, the Holy See urges “concrete, meaningful actions”, such as humanitarian visas, individual and community sponsorship programmes, humanitarian corridors, and family reunification. The Undersecretary ended her speech by calling for “an increased awareness of our fraternity” as the only key to “build a just society and a solid and lasting peace”.

The Diocesan Delegation for Migration (DDM) created the “West African Migratory Route” project, with the aim of reducing the risks linked to irregular migration. Its strategies include awareness-raising, information, and community development actions carried out in various cities. The project was made possible by the contributions of the Jesuit Mission Secretariat and Manos Unidas NGO and has so far been deployed in Guinea and Senegal. The DDM set up a citizens’ platform and a platform with civil society institutions to help implement the project. The undertaking highlights the importance of connecting the various points of the migratory route (countries of origin, transit and destination) in order to protect people in transit and seeks to “provide accurate and timely information at all stages of migration” (see objective 3 of the GCM).

“Which way forward on the implementation of the Global Compact for Migration in the era of COVID-19?” is the title of a paper by the Civil Society Action Committee, a platform bringing together civil society networks working to improve global migration policy and governance, co-convened by the International Catholic Migration Commission (ICMC). The report proposes an implementation strategy for Objective 5 of the GCM, “Enhance availability and flexibility of pathways for regular migration,” advocating international cooperation as the touchstone around which to focus collective efforts to implement the Compact. “We must prioritize the expansion of regular migration pathways and improve collaboration between States”, writes ICMC in the report. Indeed, migration pathways depend on the collaboration of at least two countries – a country of origin and a destination country – meaning that any progress involves a partnership. Ideally, migration pathways should be broadened into regional and international migration corridors whenever possible.

The report “Migration and Sustainable Development” monitors migration with respect to the Sustainable Development Goals and the Global Compact on Migration and was issued as part of the project “Faces of Migration”, of which FOCSIV is the Italian partner. The document considers the achievement of sustainable development goals, notably social, economic, and political inclusion, with particular reference to migration; and it abandons an emergency approach in favour of a medium- to long-term vision. In addition to the national dimension, the report gives attention to cooperation between countries of origin and transit. This overcomes the usual trite and toxic political debate on migration as an emergency and security problem, an approach which condemns migrants to insecurity, and instead includes them in a sustainable development plan, in line with the 2030 Sustainable Development Goals Agenda (SDGS) and the GCM (see objective 19).

Towards a holistic model of hospitality

In his Homily (EN, ES, IT, PT)  delivered on the occasion of the 107th World Day of Migrants and Refugees,  Archbishop Gustavo Rodríguez Vega of Yucatan and president of the CLAMOR network, recalled that “the walls that are built today, material, moral or legal, are a closure to the total ‘we’ that we form with all humanity.” On the contrary, “opening ourselves to those who emigrate means building a ‘we’ and realizing ourselves according to the divine image that we carry in our nature.”  The president of CLAMOR also insisted on the fact that in a globalized world “rich nations have a great responsibility to prevent thousands and thousands of human beings from being materially expelled by the misery and insecurity of their countries.” In the light of that, he asked that “powerful nations be part of solving problems.” For its part, the Church is called to be more inclusive. In encounter and intercultural dialogue, he said, “we are given the opportunity to grow as a Church, to enrich each other.”

The Servicio Jesuita a Migrantes (SJM) produced a report entitled “Enfocar la Mirada” (ES, Focusing our Gaze). The document is the outcome of the question: “What contributions can SJM make to a new model of reception, and what lessons have we learned that can enhance that model?” The report offers an analysis of EU Member States’ measures to limit the pandemic and the consequences of those measures on applicants for international protection. It presents SJM’s vision of how the reception system in Spain is responding to people in need of protection, and of where it ought to be heading. Finally, the report presents a proposal for a community model, through sponsorship and networks of host communities.

Father Fabio Baggio, Under-Secretary of the Migrants and Refugees Section, was part of the Holy See’s delegation to the 13th Global Forum on Migration and Development Summit in January 2021, that brought together national and local governments, civil society actors, business leaders, and youth representatives. In a conversation with ICMC, he emphasised the M&R Section’s goal of promoting dialogue among the different actors on the migration and development nexus, which is also a key issue in the GCM. Fr. Baggio also said that the M&R Section embraces Pope Francis’s dream, so well summarized in the Encyclical letter Fratelli tutti, of “one family working together for the future with no one left behind, no one excluded; growing together, saving ourselves together.” To this end, the M&R Section “supports multilateral dialogue, not only at the Global Forum on Migration and Development but also in other arenas. The idea is to reach a more just world where access to integral human development is provided to all.”